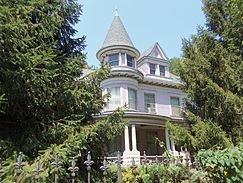 The E.A. Shaw House is located on the east side of Davenport, Iowa, United States. It has been listed on the National Register of Historic Places since 1984.[1]. E.A. Shaw was associated with the local lumber firm of Renwick, Shaw & Crossett. He also had extensive timber land holdings in Minnesota and other areas of the country.[2] Shaw had this house built as a family residence around 1901. Davenport architect Gustave Hanssen designed this house in the Queen Anne style. It is a fine local example of the late period of the style's development.[2] The house features the asymmetry and irregularity found in Victorian architecture and combines it with neoclassical details. Its location on a corner lot at the crest of long hill down to the Mississippi River and its corner tower lend additional prominence to the house.[2] This frame structure is built on a masonry foundation. The exterior is covered with extremely narrow clapboarding. The wrap-around porch features paired columns in the Doric order that rest on stone pedestals. Engaged columns in the Ionic order are found on the third stage of the semicircular corner tower. Egg-and-dart molding is located below the cornice, and a Palladian window is located in the south gable. A porte-cochere is located on the southwest corner of the house.

The John C. Schricker House is part of the Riverview Terrace Historic District in the West End of Davenport, Iowa, United States. It has also been listed individually on the National Register of Historic Places since 1983. John Schricker was a stone and marble contractor. His work included the Dillon Memorial in downtown Davenport and the Iowa Soldiers' and Sailors' Monument on the grounds of the Iowa State Capitol in Des Moines. Schricker became a partner along with Captain Chris Schricker and F.G. Roddler in the Davenport Pearl Button Company in 1895. The company made buttons from clam shells harvested from the Mississippi River. They remained in business until the 1930s. Schricker hired Davenport architect Gustav Hanssen, who was also responsible for the rectory at Sacred Heart Cathedral and the Central Fire Station, to design his house.

The residence is a sophisticated example of the symmetrical Georgian Colonial Revival style. It features an elegant front porch held up with Doric columns and a veranda above. Paired pilasters frame the front porch and are capped with Ionic capitals. The tripartite articulation of the façade is somewhat unusual with its pedimented end bays. Double doors form the main entrance into the house and they are framed by side lights and a transom. Access to the veranda is through a rounded archway of brick. https://en.wikipedia.org/wiki/John_C._Schricker_House.

Born in Iowa in 1871, Gustav A. Hanssen came to San Diego in 1908 where he apprenticed with the US Navy at North Island, and later went into private practice in the downtown area of San Diego.  During his career in San Diego, he was one of the original members of the San Diego Architecture Association, the predecessor to the current day AIA.  Mr. Hanssen designed and built many homes in San Diego.  Unfortunately, only a few remain as many were razed when downtown San Diego was developed.  However, in addition to the beautiful Reynolds (formerly the Stadler/Hanssen) home on Rosecrans Street, the A. F. Hunt home at 3255- 2nd Avenue still stands, as does Fire Station #4, built in 1937 by the WPA during F. D. Roosevelt’s administration.  Mr. Hanssen died January 4, 1944 in San Diego.